In this toolbox exercise you will learn about the A star search algorithm that game AI often use to plan their paths. Ever wondered how your game avatar decides how to get from one point to another? Probably A star, or something very similar!

The goal of this toolbox is for you to familiarize yourself with and understand A star search, and then extend the algorithm and path planning code so that our game AI can make more complex moves and decisions.

The game is simple: Paul wants cake, and he needs to find a way to get to the cake! 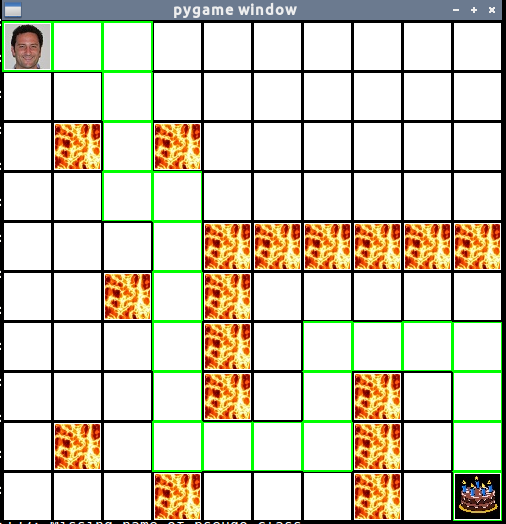 Thanks to Dennis Chen [2015 NINJA] for writing this toolbox.

Before getting started, make sure you have pygame installed:

Learn about A star search

To use the GUI/toy, first run python astar.py to bring up the pygame window. Hit the ‘l’ key to switch to the ‘add lava tiles’ mode. Then you can click on any cell to add or remove a lava tile from that cell. Hit the spacebar at any time to have Paul plan (or re-plan) his path to the cake, and highlight that path. Feel free to reach out at any time about problems, this code certainly isn’t the most robust or well structured, so Dennis would be happy to explain what the heck he was thinking to you.

Take a look at lines 171-173 of the code. Try commenting and uncommenting lines to set COST_TO_DRAW to different values, and run the code to see the values that are printed in each cell when you hit the spacebar. Take a screenshot (Fn + Print Scrn) of each example with some lava tiles placed down, and in your own words, explain what f_score, g_score, and h_score are, and why you see those specific values in the screenshot. (There should be three screenshots, printing f values, g values, and h values).

For the following 3 sections, you should implement the code to get the specified behavior, but also place tiles and set up a scenario/path where that newly implemented behavior is demonstrated (ex. Paul moving diagonally or moving through a swamp.) Then include a screenshot and explanation. Quoting Paul, “Once you make a change, you should include a screenshot of the pygame window that shows the generated path for a given set of obstacles. You should be ready to explain why the shown path is actually the shortest (for instance… “the diagonal move while costly, is necessary in order to reach the goal, paths consisting of just up, down, left, or right would not be able to reach the goal”).”

Evolve Paul and allow him to jump over lava! Add the ability for Paul to jump one square. This should cost 8 movement points, however. This will involve changing get_open_adj_coords().

Change the program so that pressing ‘s’ allows you to add swamp tiles. Paul should be able to move through swamp tiles, but they will slow him down! Moving into a swamp tile will cost 3 additional movement points, so Paul should really avoid moving through swamp tiles unless he has to. Note that this means that moving to an adjacent swamp tile will cost 4 points, since moving adjacent one square costs 1 point, and the swamp adds 3. Moving into a diagonal swamp tile will cost 6 points. A swamp.jpg file has been provided for you in the /images folder. You will probably have to make some changes to pygame’s main_loop to detect key presses, and you’ll have to implement the empty _add_swamp() function. Take a look at _add_lava() for inspiration, and note the terrain_cost and is_unpassable arguments that are passed to the ObstacleTile constructor when a lava tile is made!

To turn in your assignment, push your code and screenshots to GitHub.